First off, if I read it right, that link is to the V version of the UPS, though the manual seems to apply to both, and I assume you've got V service that you're plugged into. The front panel doesn't have an LCD so the indicators are it rather than gauge readouts. The manual says that the reading being given by those five LED's is a value between the highest lit and the next one up so it's an approximation at best.

Indeed, I've found that with the UPS's with LED screens that actually show numbers, an approximate run time is given for the current load vs battery state. But if you put it in test mode, in which the load is actually running off the battery, the displayed run time will be different. That's why I chose to use battery level as the deciding factor for when the Mac should issue the shutdown command to itself.

Moreover, my Energy Saver control panel says the "Time Remaining" is unknown, meaning, I suppose, that the UPS isn't reporting it, while the percent of battery charge is reported. I'd suggest that you hook everything up, then see if Energy Saver control panel's UPS option reports the battery level percent on the menu bar, since if it doesn't the Mac would have no hint of the battery's state and whether it's time to shut down.

I think part of the problem in using your UPS is the paucity of information the front panel provides. It took me a while to figure it out because I'm using these: Feb 27, 5: I have a Mac and a PC, and I want it to shut both machines down, is there a way to do this? Maybe with the Smart-UPS software? Feb 29, 2: With a network interface you could then in theory use the network client from APC on both computers and have both computers running off the UPS and both able to monitor and auto-shutdown.

However I find the APC software to be very poorly supported e. I have no idea if it is El Capitan compatible, it is also as far as I am aware command-line only. Another option is to use alternative software in particular there is some free software called NUTS. Tips from other users.

Nice work. I'll update my post to refer to this one as well. It's Coming Are You Ready? Upgrading from RAIDiator v. Message 2 of Otherwise, thanks for the great guide. Message 3 of I've got everything working except the Startup Item. I've tried the approach on this thread and the one for The plist files in these don't work for me, I get Console messages about Malformatted parameters file: Using the Message 4 of Here's mine Snow Leopard: Message 5 of And perhaps slightly more usefully! Message 6 of Working now using your UPS and the plist from http: I'm running Happy Console messages below, thanks for the help.

UPS Message 7 of Thanks for this, it's working well for me. If it's helpful anyone who's already using macports rather than fink, I found that the macports version of nut works just fine out of the box on Lion, so all I needed to do to get the basic install working was "sudo port install nut".

Message 8 of I haven't actually cut the power and done a real test yet, but upsmon is running fine and I'm able to confirm connectivity with upsc. Here are some updated instructions if you're using MacPorts to install: For any MacPorts install, make sure you're using a supported version of Xcode and that you have additionally installed the command-line tools Upsmon. Start from the sample file in there or use DBott's upsmon. The script should kick off upsmon on boot.

Message 9 of My advice is to go with MacPorts should any newbe attepted to do this. It's clear and simple, pretty straightforward. My upsmon. I assume I have everything more or less ok lets see what ig says regarding my previous comment , so on with my questions: What happens if the user is not on Terminal? I've also noticed that when my Mac is asleep, it won't hear the messages sent from the NAS. What about the rest of the people here? I would appreciate your responses and help. Congratulations on the clear explanation Infinite and the rest.

Thanks in advance, Thanks.

Good enough for you. Thanks for writing up this hint, colinng. Hopefully a few folks will appreciate it. What a strange comment. Clearly there is value in silencing the beeping noise- I'm going to have mine mute during the night. It does open TextEdit to display two windows, one with the apcupsd. You might be able to skip this step but should read through the config file now to ensure its default settings match your situation.

But its permissions are read-only so you can't save changes using TextEdit, which doesn't allow superuser override. Navigate to the directory and sudo-launch your favorite CLI text editor vim, pico, etc. Having a little Unix knowledge, I lived dangerously and edited various parameters as suggested by their comments.

Recall that lines prefaced by are comments, often useful example settings; but for functional parameter specifications you must remove the. Another great feature of apcupsd is that you can install it on more than one machine, and each can communicate with the other. If you have several machines that are powered from the same battery, you can set up apcupsd to shut all of the machines down gracefully before the battery runs out.

You can also do lots of other cool things, limited only by your imagination. For instance, I have two Mac minis in my server closet, and when power goes out and the battery is almost out of juice, on each machine, apcupsd quits all user-space applications with an Applescript run through the 'osascript' command-line tool, schedules a 'wakeorpoweron' event with the power manager so the machine will reboot once power is restored, and then shuts the system down.

The software also works fine with Intel-based Macs. While their wilful neglect of Macs in terms of software provision might have been justified the many years ago when the Mac market was in serious decline, the massive increase in Mac share in more recent years has led other more sensible companies to resume providing decent Mac support. Even Microsoft have improved their Mac support: Not working in Attached to driver: Shutting down UPS monitoring - Try running this: Otherwise, it'll look similar to: Are you running your intel chip with OSX's bit kernel? 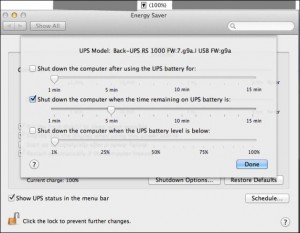 I get your error msg with 64bit though it works fine for me with bit. My system log shows this during the boot: Mar 19 Starting UPS monitoring Mar 19 Yep, running in bit Ah well: Since I didn't see it mentioned in the other posts, I thought I'd add that the apcupsd installer places an application--apcupsd. When launched, no dock icon or interface window will open.

Instead, your only indication that it is running is the appearance in the menubar of a generic UPS icon. Should a connection failure occur, the icon will acquire a superimposed red '? Clicking on the icon reveals the available interface options.